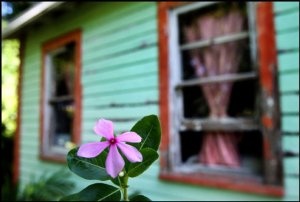 Do believe and from those windows—across the bay dancers staged and caged beyond the believers of dawn and crossed these watered gates in boated crafts and anchored along the sandy shoreline. In these model times—love pushed swings without colored desires save to be and swing those roped contraptions higher and higher and higher and to fly among white billowed clouds and raindrops—dew-dropped in those spaces along these places.

Grass carpeted floors of high to sky mountain flats and red sand shifted when raining season began the falls of liquid both silver-clear and diamond-splash across the drinking desert of sand and sea and jungle sleep. Once hearted fears did not exist within the laughing times of fearless pursuit and the unrequited necessities of being the beginning of being the life of long summer moments and winter short when snow covered the dreaming spaces of golden sands and purple seas.

There was a city of Calimesa. A place of Crowman day and Crowman night and a place of haunted hunts and battles of no-foe. A timed place when jack-booted terror stood upon the sacred throats of freedom fighters and painted the ruined roadways with blood and mud and mired ditches with filthy ragged cloth and stained once cleaned spaces—being days before political crazy collapsed—died and disappeared.

He was a Crowman…His face known a century before sickness visited his story and around him the crowds of everyone disappeared and the burning witches forced fire to cleanse another place of sickness and sorrow and loss and start and another beginning of the ends of means or peace or reason to be another being. He piped a silver flute and little ones followed him across first—fields of dirt to concrete streets to rutted shapes of broken road to oiled seas and crumpled ceilings under skylights of grays and flashing streaks and thunder.

Behind his place were story lined message and words of substance and nothing and his something taken from places in days before or after the plague of fires and water and wine and hope-slopes where snow boards and sleds slipped along icy waves and his childhood danced against a dream or two or maybe three. These were the story of lives before and beyond the notions of list things done and lists to check off the hours of a day-a month as century years separated into segments of almost failed to realize the moments of living among the stars and beneath the sky fall of living or dying or living again.

As the piper played, children danced into a ragged sorted night and as they danced, the nothing of Goddess flashes or the darkness thunder bothered to disturb those claps of little hands and rings joined songs and laughter only as a child may laugh or sing. He was the Crowman piper of the raggedy sorting day when Coven called and Crowman repeated the role of rolls and the answered ones again danced behind and beside the flute of silver crafts and a simple dancing song. ‘A better day,’ he cried and everyone agreed.