We, with adoring attention, create robots small, bundled rows of life about Earthrise and beneath Moon sparkle still altered-still same and always twirl-spaced ‘cross time bridged and rhyme. We inspire desire and require sweet diversity. Until shaped we shift created life, a fabricated slip and tanked in agile spark from womb-song-to-light-then-back-again-to-two-removed and started again.

Genetic profiles whirling webs from calculations inherited and dancing traits and the merging of urging, originate the beginnings of tiny automata and mirrors of images and with simple complexity, children of love are born complete with slivers of magic beasties, portions of golden hearts and short stops between Eternal Spirits’ crossings. Blood dancers and double bodies and whirling twirls with once slower motions now come constant as light races day bright into night.

The evangels of lofted Deities’ notions as something unusual crawls our way. Those haves may have half twirling tales or songs or other psalms of other notions that those highest Gods of swirl cannot contain life and the wag-of-wiggle of shaping-shifters and Robots are We. And! Those ghosted machines may also be those spirited Us. Tiny speck-to-magic-witch and we survive all to dance life across those many spaces of races and kiss storm stars known or stars to remember and costars to forget.

Dare we trace or dare-we-risk a reach inside spaces of Code-genetics and count the current streams to spin or craft to be or to leave the untouched alone. Why not touch to feel? Some today’s we destroy both the of wonder of wonder and sometimes we die in the fearing of fear. Sometimes, eternal spirits and the realm of nonsense physical do confuse and bewilder or cure the magic of life and the mystery of death.

Images create as mirrors drift from mortal moment to immortal spirit with motions from nothing to something and again back to those nothings of something that may have almost started or stopped and started all over again. Would have and could have and should have may have already been here or gone over and over, ad infinitum. The life, both of, Robot Creators and Creator Robots forever last and through our eternal stretch and scratch will survive…

“It is the duty of us all to ensure that our society remain one of which we are proud, not a society wary of immigrants and intent on their expulsion or a society that disputes the welfare state or a society in which the media are controlled by the wealthy. We would oppose such things were we true heirs to the National Council of the Resistance.”— By Stephane Hessel

We are émigrés of this sphere. In a blaze of mystery or notions or nicks or knacks or reasons or rhymes, we move through time and place and home and toward one-to-another. We are the directors ‘blood of red’ same air and the singers of fictional truths drawn by spirits same and the dreamers of courage and the chance of hopes. We are the past, the present and the days of future gambols. We are the virtuosity Gods!  We are life, all growing and all walking and all crawling and all swimming. We are Life; perfect and unstoppable. And! It is always better to fall in love than to fall in battle!

I think the thing I wanted most was just never meant to be
a thousand waves, a thousand ghosts their sorrows follow me

These are the salty ways of salted seas and flecks of foam scatter along shore-sided shifts of sand from wet to dry and dune rise above and beyond watered edges before ruined boardwalks remind nothing of something once savored and watched and known by forgotten ones—once upright writers of the times and the sounds of ‘days of a future’s past.’ Still! We all cross spaces along these places of the races in time gathered and night ships crossing heaven’s ragged ridges…

Lights at the end of the world. Now! See those lights across these thousand worlds—welcome home to places you have started and places to begin again or again or on another day’s end and another night’s beginning. Drums to market those marks of time we call our own as heart beats begin again and ticks for a while of wills, coming around the corners of spaces in places seen or forgotten or found once for many crossings of spaces and races and time.

Steel Riders pause by waterside as tides of water kiss shoreline’s wavelength along with one hundred sounds and as gulls ride the dips of above and around piers of ruined wood and splintered ages where once the seaside existed and tide changes mattered to boat anchored and ships sailing against the evening lines. The water’s edge and the skies of blue and pink and red and orange and yellow turn as earth spins sets sunlight to softness and twinkles of sky lighted canvas sheets the blue gray into darkness and stars light the sailor’s way along the caverns of space and place and the race of time.

Entity Religion is in constant enmity with one another? Satirizes self-contented morality and suggests that in the end all religious groups are going to engage in violent and selfish acts regardless of their professed moral teachings. Just another Government and ‘governing whimsy’ is corrupt, nasty and destructive. Religions’ immaculate contortions, ‘American Style’ twist in-out of ‘the Separation of Church and State’ producing a ‘Governmental Right to Legislate Morality?  Wrong! For only Lovers-have-Lovers’-sacred-right-to-Love. Love is being! Morality is a selfish word…

Portion-for-us and scatter across understanding, simplicity and the variances in relativity either linguistically determined or silenced by rain loud along with gentle beginnings or the whispers of fire-fly wings and lighting. Wait! Eyes closed and listen to the thunder rolling ‘cross separated skies as unseen flashes knight the ocean and crash booms into that silent space between raindrops and life. Science eternally dances with superstition. Once and often either momentarily wins something-of-else or another choice-to-follow. Crossroads to matter, chances to spark and destiny always flirts with other, up-and-about or perhaps.

Real Sea, we will see and another and another; of water-ships up, and places far away. This is here and between landings another beach to reach quickly discovered then thrown away. Dragging the lines of surf’s fall and rise as waves dash high into moonless sky and crash along miles of sand and shoreline. Sea inhale and exhale and breathe again and time marks nothing when endless and everlasting. So! Forever ‘surf’s up’ on the eternal sea, so alive and just for me! 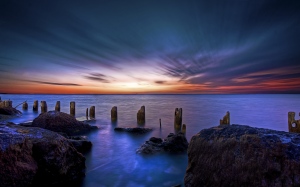 “The circle safely closed—the web building starts—the markers of builders old and builders new. Star Guide—folded into original shape— until it is—again required and opened to read and follow—‘cross sky-bridge….Bang-Bang-Bang and let the game begin—again…‘Tis’ good this Loving Rhyme. So! Follow this Time—this Twine—Re-wind. And! While I breathe—I Hope…”

Still! Burdened Beasts—and too many-for-Less and More—for just a wig-waggled few and ‘the beat goes on’—donchathink? The United States of America began in a whimper of ‘freedom for those same few’ and through the blood of—many—lesser folks—still continue today—failure for the multitudes and stolen—by anyone—claiming a ‘Runaway—Machined-War-Mechanism’—is prosperity and Death is Freedom’s Sacrifice. American Genocide began when first—Native Americans dared believe and were—slaughtered for —Well! ‘Long Live-that-Crazy and All—Mixed-Up—Dream Me Up—a Paradise or Two.’

World-Speak is never Nation-Speak—unless forced by strength—against—weak and imbalanced places—ruined or lost and found and lost again…Wait! Imbalance a country—or a region—and will—the civilization of many—be destroyed—by the Destroyers or by the Imbalance of the Imbalanced? Strategic Genocide—absolutely. Toss in a dash of—Religious intolerance and bang-bang-bang—ready-made—imbalance with large doses of death—destruction and War! The middle of an Eastern portion of a world spinning across a universe of space and time of landfall and splendor—has a determination—created by—a Western ideology so foreign and devoid of principle that Sociocide is a study in collateral damage and a ‘resourceful’ necessity. Egypt—Palestine—Lebanon—Syria—Iraq—Iran and…Presently—these wars are battles of imbalance created by this Terror from the West. Someday soon—this will pass…Life is sacred and family is love!